If you haven’t heard of Backwordz then you’re in for a treat!

Have you ever stumbled across a new artist, completely by accident, and found yourself with a brand new, repeat obsession album? It’s a rarity, to be sure, but when it actually happens there are few things that are better.

My exposure to Backwordz was a happy accident. On a trip to Door County with my wife I opened up the YouTube app and a music video for the song “Excuse Me” by Fire From the Gods caught my eye (I’m a sucker for tag art!), so I clicked. It was that wonderful blend of rap-metal that my 90s kid ears were conditioned to love from a young age, and has been missing from the music scene as EDM and trash-pop have crowded the airwaves. When I heard it I rejoiced.

At this point, I know that there are probably a ton of Backwordz fans that are ready to stab me because the frontman in that single was actually AJ Channer, and Fire From the Gods was frontman Eric July’s former band with whom he parted ways.

I know this. Hear me out…

So after I’d found that song, I frantically browsed the “Up Next” thread to find more eargasms, and stumbled across another video called “The Capitalist“. I’m big on lyrics, so I had to see if these guys were trashing Capitalism or pro-Capitalist, and a cursory Google search revealed a pro-Capitalist message. Score! So I decided that I needed to know more about this band, because bands that plug this kind of message are even more rare than rap-metal these days. After Googling a bit more I found out that the first video was fronted by AJ, and that Eric July, who’s two years younger than me and has his own Wikipedia page, had left the band to make his own music.

The page also described July as “an American rapper and political activist“. Ok, by now I was really fucking intrigued. It’s so hard to find great music with a great worldview when you live on the Right. Most of the industry is notoriously Left leaning, or disinterested in politics. Growing up, my favorite bands like Rage, and System of a Down made kick ass music, but I never aligned with their world view.

By now I was tumbling down the rabbit hole full speed. I’d looked up Backwordz and found the single “Be Great” as well as three other tracks they had released. That was it. I had four tracks of pure awesome, and I wanted more!

Well, as it turned out I didn’t have to wait incredibly long because this year Backwordz delivered in a big way. They released their first full length album on March 31st and it is 18 tracks of pure adrenaline and passion that’s everything I could’ve wanted from a full length release. Backwordz has, with Veracity, done what Limp Bizkit or other rap-metal outfits couldn’t have done for the genre. While other bands have always delivered a sonic punch to the gut, and awesome hooks I’ve always found the lyricism lacking (severely when it came to Limp Bizkit), and lyricism is what takes a band from good to great in my book.

This album unabashedly advocates for maximum freedom of the individual and rages against the corrupt political elite, while deftly crafting together sick raps and aggressive metal hooks. July, in my mind, is one of the best up and coming frontmen in the industry. He’s a guy to watch. He can sing, scream, and create political raps that aren’t cheesy or clumsy. He does it all.

The best part of this album is not simply the content but the statement it makes by simply existing. July left Fire From the Gods because (as he tells it) they were focused on getting a basic record deal, and going about achieving musical success in the conventional, corporate way. Backwordz on the other hand is an independent, self-funded release which made some serious waves in its first week of sales. 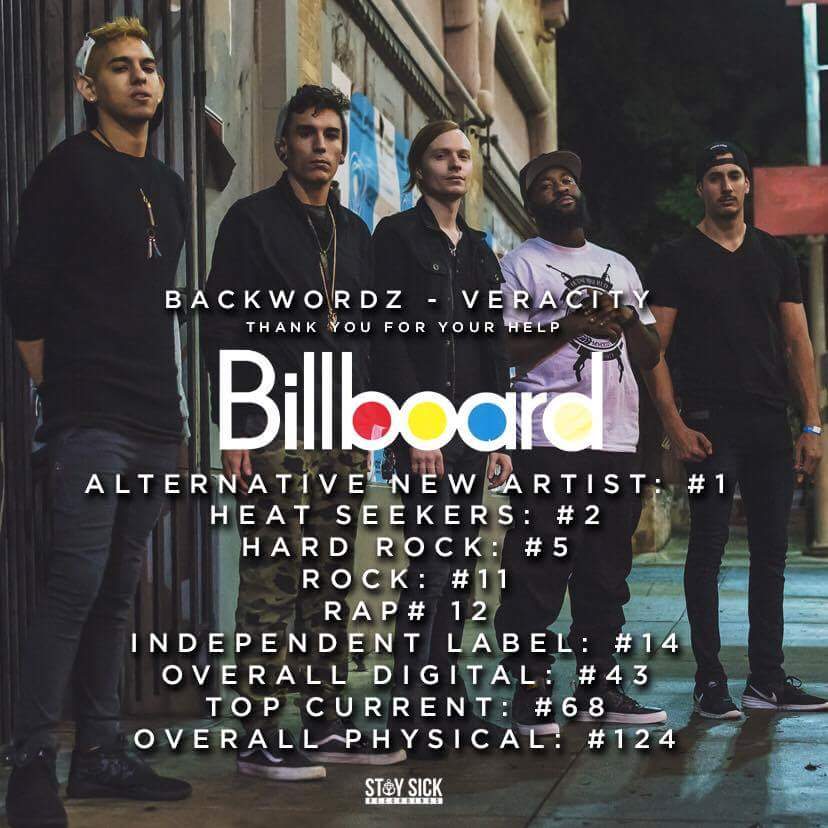 I’m a sucker for a success story, and this entire outfit is a success story. They don’t simply create music that’s generic and focuses on pandering to the most profitable demographics. The subject matter of this album ranges from individualism and AnCap Libertarianism, attacking advocates of reparations, the flaws of the democratic system, to the process of creating a successful independent label. They’ve practiced what they preached, not relying on the mainstream corporations in the heavily monopolized music industry to get their message heard, instead opting to retain their integrity and make a product that is purely their own.

For this reason I emphatically nominate Backwordz for the Best New Band of 2017, and ask that you support their venture. A great way to do this is by picking up your own copy of Veracity today!